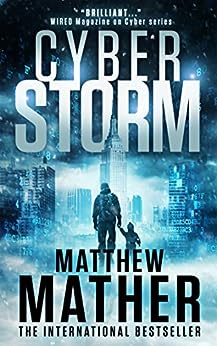 The incredible and uplifting story of one family’s struggle to survive the destruction of New York in a massive terror attack. Million-copy bestseller now in development for film by 20th Century Fox.

"I couldn’t put it down…shows how dangerous our transition to an interconnected infrastructure has become." Karic Allega, Joint Military Cyber Command, US NAVY

NEW YORK GOES DARK IN THE DEAD OF WINTER…

BUT WHO IS THE ENEMY? AND WILL THEY STRIKE AGAIN?

Mike Mitchell is an average New Yorker struggling just to keep his family together when a string of disasters shreds the bustling megacity around them.

The Internet and communication networks go down…a deadly epidemic rages across the country…then a monster snowstorm cuts New York off from the world.

Days go by without contact to the outside world. Then weeks. Murder and vigilante justice replace law and order. Millions fight to survive.

In the chaos, conspiracy theories rage about a foreign cyberattack. Was it the North Koreans? The Russians? The Chinese? Might it be the first shockwave of a global shift in power? But even these questions become unimportant as Mike and his family struggle for survival in the wintry tomb of a doomed New York.

FROM THE BACK COVER

Matthew Mather is a leading cybersecurity expert who presented in Washington to the FBI and CIA, warning of the impending danger of possible cyberattacks like the one that "hobbled Atlanta" in March of 2018 as reported by The New York Times.

Translated in twenty three countries, CyberStorm is a worldwide bestseller, a new apocalyptic disaster classic in the spirit of On the Beach, Alas Babylon, One Second After, and Lucifer’s Hammer that will appeal to fans of Tom Clancy and Brad Thor.

Award-winner of the GoodReads Choice Awards in 2013, millions of readers voted CyberStorm into the Top 20 of its category on Goodreads. It has ranked as the number one bestseller in Amazon’s technothrillers, conspiracy, military, post-apocalyptic, terrorism, and science fiction categories.

New York Is Cut Off…

As the holiday season rolls into full swing, a monster winter storm descends on New York City as a string of bizarre events grips the nation. First the internet and cell phones go blank, then the power goes out just before New York is completely cut off….

At first, residents of the city treat it like any other black out, but then as the days and weeks go by without contact with the outside world–and New York is blanketed by feet of snow–desperation and fear set in. In the chaos, conspiracy theories rage. This is the very personal story of how one family survives, and of the worst and very best of humanity in the face of catastrophic disaster.

CyberStorm is an international bestseller, translated into over twenty-four foreign languages including most recently Chinese and Russian. This scary, thought provoking and believable tale of cataclysmic survival has gripped readers all around the world.