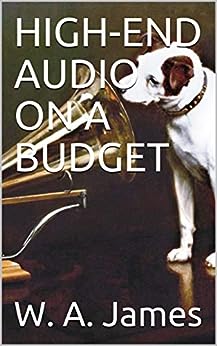 This is a revised version of the book previously known as; “Guide to the Best HiFi Stereo System.”

The following is from a book-review at TNT-AUDIO magazine:

“Along the line the author, W.A. James dissects most of the things that go into an audio system and along the way tramples on some of the sacred cows that audio geeks take as gospel…There is a great deal of information in this book and the author covers most of the important parts in audio although he eschews delving into the cable and tweak debate. There is much on everything through turntables, reel to reel tape, pre and main amplifiers and speakers (& digital too – Ed) all of which are treated to his ideas of getting the best without taking out a mortgage on your house to get it….In my opinion a worthwhile purchase and makes for some soul searching in our quest for audio nirvana…..I found it a good read and at the price a bargain and refreshing in that there is no financial pandering to advertisers going on in the background.”
—————

The preceding are excerpts from a review by a writer at TNT-AUDIO magazine. Many thanks to him and to that magazine for the kind words.
However, do leave a review here at Amazon if you can, please, but only if you find the book interesting (for obvious reasons). Thanks. And many thanks also go out to all who’ve already quietly bought the book, so far – and to everyone about to do so. WAJ.
—————

Special note: There’s a particular segment of the audio spectrum which is literally missing from most modern systems and (especially) speakers. As a part of the most important area of the spectrum, this region is critical to the accurate or realistic reproduction of music – demonstrably more-so than some others, actually. Yet, its omission has long been so pervasive that it could be argued that the fact of its omission forms the basis of a new (lowered) standard in audio. This issue is relevant to quite a few aspects of the audio-industry, and it’s fundamental to the authenticity of audio-reproduction, itself. And, because of this level of importance to those interested in authentic audio-reproduction (and also because of the many instances in several aspects of audio where the subject is relevant – including discussions of some amps, preamps, turntables, and most speakers of today – not to mention the reasons for the deficiencies so many components display) it is inevitable that the issue will arise in several diverse areas of discussion with the frequency which reflects the reality.
Incidentally, no proper book on the world’s climatic conditions today, for instance (with all the consequences, such as; destructive storms, droughts, famines, heatwaves, floods, etc) could ever be done without constant reference to the PRESENCE of ‘global-warming’ and its causes and effects – arguably repetitious references, but warranted and absolutely necessary to bring the message across with the necessary weight to grab the much-needed attention. To deliberately and un-naturally limit the mention of a very fundamental cause of the problems would be inappropriate and misleading, giving the impression of a lesser problem than that which actually exists.
The very same applies to the ABSENCE of the important segment of the audio-spectrum mentioned mostly but not exclusively in the first four speaker-related chapters of this book (and hidden/avoided by most audio-mags almost everywhere else) though ‘palatably’ diluted within the context of the countless other interesting issues also examined here in the many other chapters less-related or totally unrelated to that particular issue.
——————